Have you ever thought about how your auditory system works? How the heard information from your surrounding reach your brain? The first important discoveries about the mechanism of ear were made by a Hungarian scientist, György Békésy, whose scientific results defined our present knowledge of the auditory perceptions. Read more about his life and achievements, for which he received Nobel Prize in 1961.

György Békésy (Georg von Békésy) was born in Budapest on June 3, 1899 as the first child of a diplomat’s family. After receiving his early education in Munich, Budapest and Zürich, he went on studying Chemistry at the University of Bern, and in 1923 he received his PhD degree from Physics at the University of Budapest (today Eötvös Loránd University). 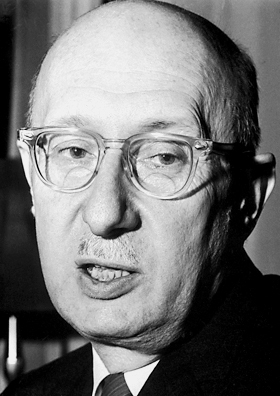 György Békésy’s research interest toward the mechanism of hearing roots back to his work at the Laboratory of the Hungarian Post Office from 1923 to 1946, when he made researches with telecommunications signal quality. At an early stage, he was in charge of developing telephone receivers, for which he had to understand the mechanism of ear as well. During his work, he carried out particularly accurate experiments on hearing which made him possible to study ear as the main component of transmission system. Together with Endre Magyari (an engineer and pioneer of the Hungarian radio broadcasting), he also worked on developing ground-breaking acoustic systems by which, in the 1930s, he could make the acoustic design of the Hungarian Radio studios as well.

During the World War II, Békésy’s laboratory was hit by a bomb and his instruments and notes were all destroyed. These hard times made him continue his further researches at the Karolinska Institute in Sweden, where he developed a novel patient-controlled audiometer, which is still known as Békésy-audiometer all over the world. In 1947, Békésy moved to the USA to work at the Psycho-Acoustic Laboratory of Harvard University, then he accepted the invitation to lead the Laboratory of Sensory Science in Honolulu, where he spent the rest of his life devoting himself to his researches on perception. By his continuous research activities over the years, György Békésy contributed mainly to our understanding of how sound frequencies are registered in the ear. By developing an innovative, anatomical dissection technique using a low-powered microscope, he could determine the mechanical characteristics of the inner ear (cochlea), and made it possible to observe sound waves in the basilar membrane. During his fundamental experiments, Békésy invented that hearing works because sound waves are converted in the ear into vibrations in membranes and bones, and they are further converted into electrical impulses that are passed on to the brain. This process is the reason of our auditory impressions.

For his work and discoveries, Békésy was honoured with several scientific prizes, including the Academy Award of the Budapest Academy of Science (1946) and the Gold Medals of the American Otological Society (1957). In 1961, he was awarded the Nobel Prize in Physiology or Medicine for his landmark researches on the function of the inner ear. As setting new standards for auditory experiments, György Békésy is rightly considered to be one of the greatest scientists of his lifetime. His research achievements laid the foundation of the further works on sound and hearing and have been decisive in auditory education up until today.

If you want to read more about Hungarian Nobel prize winners, check out our articles about Imre Kertész and Albert Szent-Györgyi.

Photo on Wikimedia, Photo by mrsiraphol on Freepik