The main concept of the opening of the biophysical research centre with the total value of 1,5 billion Forints equipment pool was to answer a scientific question from the molecular level to the patient’s bed via animal tests. The name giver of the new centre is György Békésy, the Hungarian biophysicist, who received Nobel-Prize in medicine-physiology in 1961.

Dr. Miklós Kellermayer, Head of Department of Biophysics and Radiation Biology, greeted the participants at the opening ceremony of the research centre and noted the emphasis of the department with which a dream has become true.

Dr. Ferenc Bánhidy, Vice-Rector for General Affairs, compared the research centre to a special power plant which increases the scientific capacity of the Department. Moreover, it ensures possibility for cooperation within the university. He also added that the new research centre has outstanding value for theoretical and practical researchers.

Dr. Károly Szász, Chancellor, in his toast underlined that the main goal of the Department was to establish a world-class equipment pool which effectively serves the biophysical researches of Semmelweis University and the national science. He also pointed out that the main concept of the centre was to answer a scientific question from the molecular level to the patient’s bed via animal tests. In his speech, he outlined György Békésy’s path of life, the Hungarian biophysicist, who despite not being a physician, was given the Nobel Prize in medicine-physiology for “discovering the physical mechanisms of stimuli created in the cochlea of the inner ear”. The Chancellor also added that engineers dealing with telecommunication keep Békésy in evidence as “the only post engineer with Nobel Prize”.

Dr. Károly Szász expressed his appreciation to the Faculty of Medicine and to the Department, as with this new biophysical research centre the equipment pool of the laboratory broadened with the total value of 1,5 billion Forint from internal resources and tenders gained between 2009-2018. The significance of this world-class centre is proved by the fact that it produced more than 778 million Forint research income in these 9 years. (In the research centre e.g. the following equipment can be found: laser scanning confocal microscope, nano-biotechnological and in vivo imaging centre, multiphoton microscope, atomic resolution AFM-equipment.) 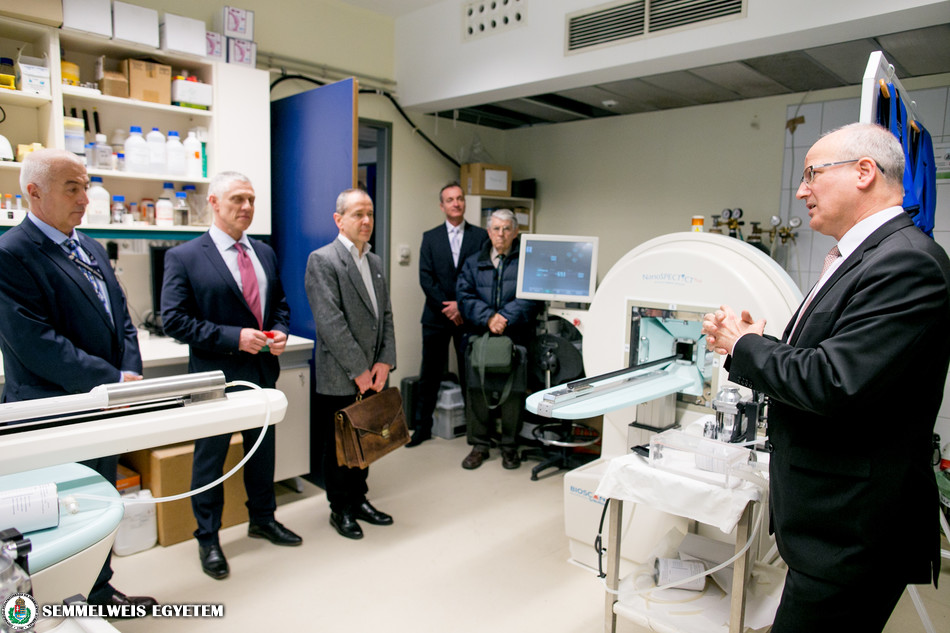 Finally, the Chancellor expressed his hope that the biophysical research centre would present professionals to the world who are worthy to the name giver of the centre and they will achieve the highest honour of scientific life, the Nobel Prize, to our country by their future human, professional and scientific activity. After the ribbon-cutting, the participants gathered for a symposium to honour the 70th birthday of the Department of Biophysics and Radiation Biology. Dr. Miklós Kellermayer greeted the audience and explained that the jubilee symposium is a part of an international series of events, Biophysics Week, which is founded by the American Biophysical Society. Dr. Ferenc Bánhidy in his greeting speech said that as a practising physician he had learnt that the science of biophysics provides a maximal base in diagnostics and in every area of healing. He also added that a mortal physician deals only with the treatment of patients, but he believes that the students of Semmelweis University will be able to search for the roots, as it is much easier to heal if the professionals are aware of the biophysical based equipment.

Dr. László Hunyady, Dean of the Faculty of Medicine, said on the occasion of the 70th birthday of the institute: although there is a lot of debate about the correct ratio of theory and clinical practice in general medicine education, he believes that the synergy of the two is needed. Medical education is not only about teaching certain interventions and medicine to students, but also about providing them with natural science education. The Department of Biophysics and Radiation Biology has always had a key role in this, he said. In the Dean’s personal opinion, world-class developments which started in the last decade prove that one of the strengths of Semmelweis University is the symbiosis of theory and patient care.

Dr. László Mátyus, President of the Hungarian Biophysical Society, stated that without the Department of Biophysics and Radiation Biology the Hungarian Biophysical Society would not be the second largest biophysical association in Europe. The institute operates as a flagship in the field of education, as they have always paid close attention to transferring an easily followable and didactic curriculum to ground further medical training.